Pictured above: Ringo Starr! And his brothers Isaac and Jacob in tow!

All of our amazing fellows are the dad’s for our Bernedoodle and Goldendoodle puppies!

All of the boys, currently active in my breeding program, have had genetic and OFA or PennHip testing. We take puppy raising seriously and only choose the best of the best, the healthiest boys and girls!

Our genetic testing is done by Paw Print Genetics, GenSol and/or Embark. Our hips and elbows are either OFA or PennHip. In order be parents in our breeding program, they must clear genetic testing and test either “good” or “excellent” with their OFA certifications or “Pass” the PennHip criteria. While health testing has improved greatly, just like with humans, it’s just not possible to test for every condition out there unfortunately. However, we do have a health guarantee within the adoption contract. 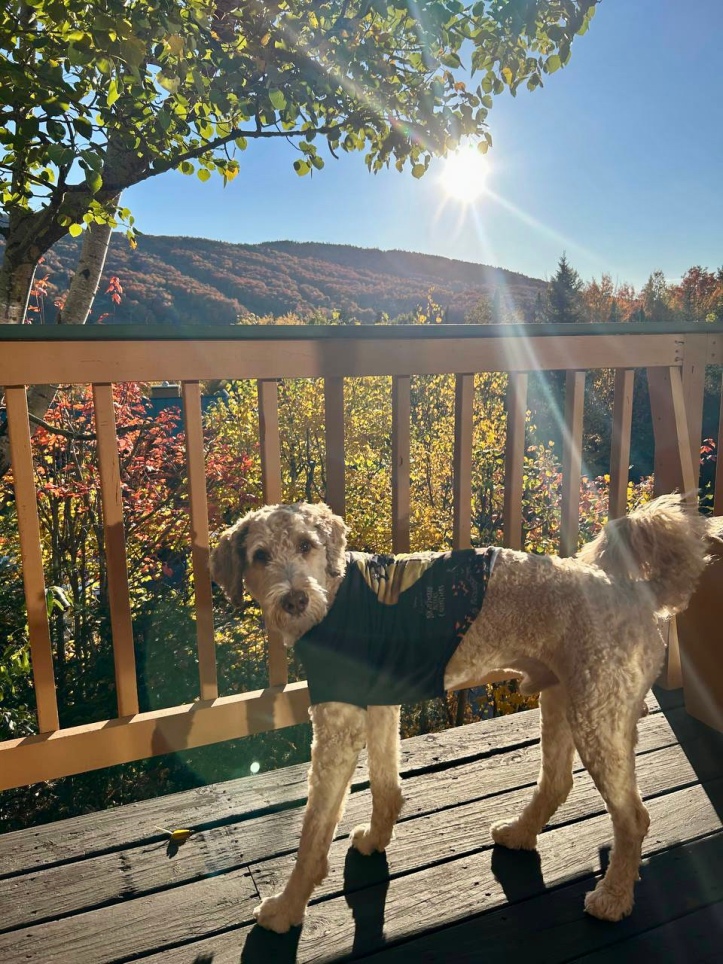 “Rocky Raccoon” or Rocky for short, is a 4.5 year old F1 Sable Tri-Colored Bernedoodle. He is a cross between a Standard Poodle and Bernese Mountain dog. His color is a unique sable color consisting mostly of a caramel tan color with hints of dark brown around his eyes/ears/beard and also has the classic tuxedo white pattern on his chest. He is completely non-shedding and has a silky wavy coat. Rocky is a “show stopper” in public because he looks like a teddy bear and everyone wants to know what kind of dog he is! He is very affectionate, smart & loyal. He loves to be by my side, he loves playing fetch and, of course, going for rides in the car. Rocky will weigh in at about 85 lbs when he is fully grown. Rocky’s Embark Results: archive.zip 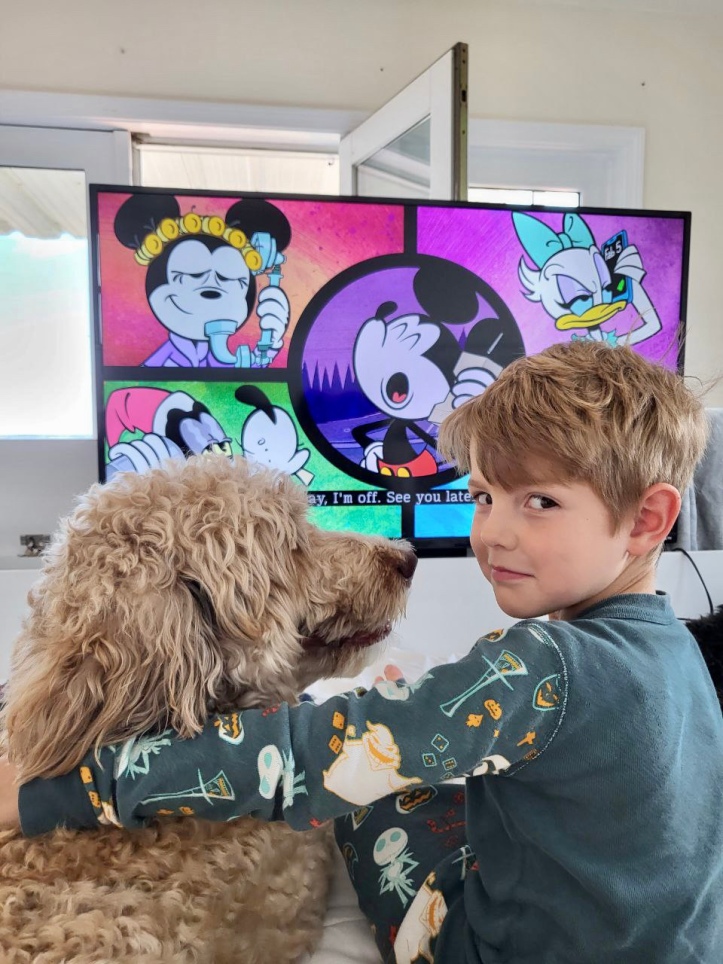 Sargent Pepper (pictured above) makes sure there are no lonely hearts club bands around here! He is the sire to F1 Standard Bernedoodle puppies born from Bernese Mountain Dog mom’s. He is a party poodle with a “blaze” (white stripe between eyes) and he is an AKC registered 65lb Standard Poodle. 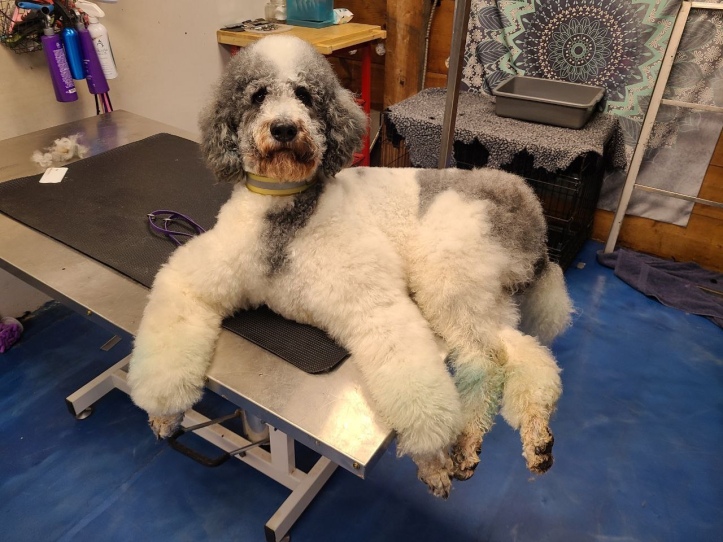 He is such a sweet, smart, calm boy and serves as a mentor at a training facility to dogs with aggression issues. They can try as hard as they want to provoke Sargent Pepper but he can’t be bothered! Sargent Pepper consistently produces three color variations when honeymooning with a BMD. They are Traditional Tri-colored, Brindle Tri’s and Sable Tri-Colored Bernedoodles. Please see our page about colors and patterns to learn more! 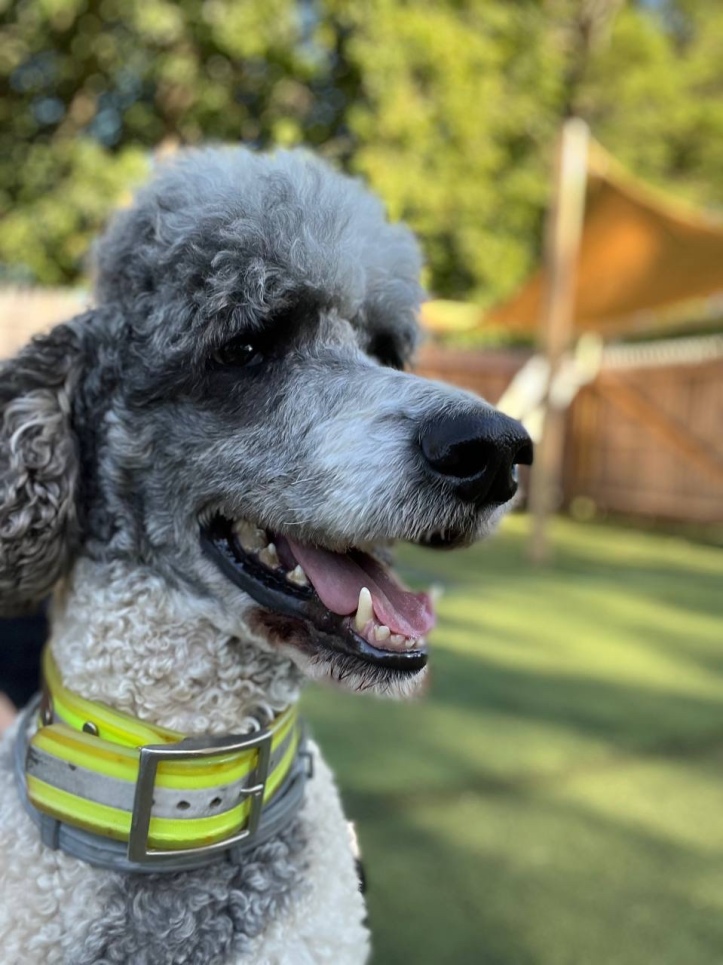 Ringo Starr is a super star here at Massachusetts Bernedoodles! He is an F1 Traditional Tri-Colored Bernedoodle and the son of Lucy and Marco’s Mini Bernedoodles. Ringo Star weighs in at approximately 45lbs. Many of his pups will have a more of the traditional look with the brown, black and white coloring. He will be paired with the bernedoodle mom’s for Mini Bernedoodles beginning in 2021!  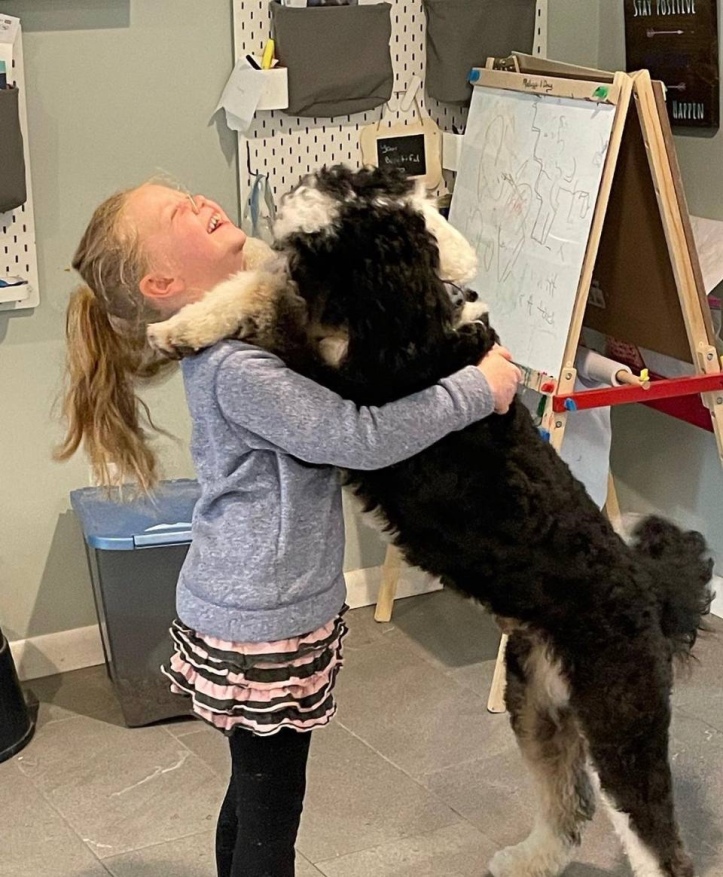 Ringo adores his 4 human siblings and riding in the car. He especially loves going to their sports games, driving to the bus stop and running (or hopping) around the neighborhood with the other kids and dogs! He’s wonderful with children and has a very passive temperament. Super Chill and Super Handsome too! 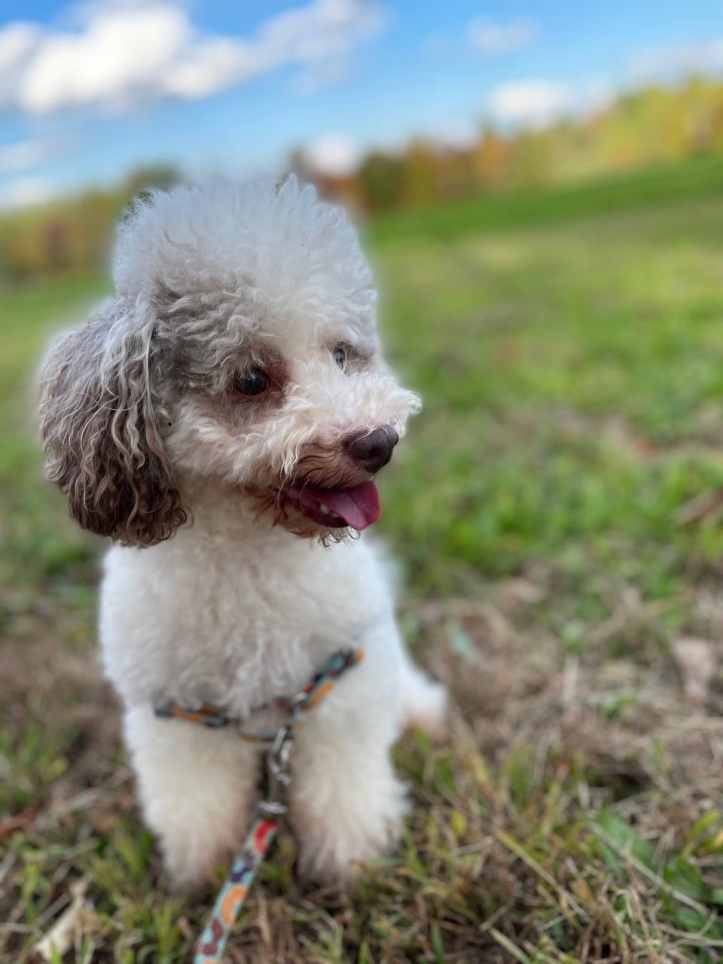 Jacob is my ~12 lb Toy Poodle stud muffin! He’s the smartest, most out going and calm toy poodle I have ever met! This is very important since most poodles become more and more “high strung” the smaller they get and some aren’t playful or friendly at all. Not Jacob! We only want sweet bernedoodles at MBD so we are super excited to have found this little man. 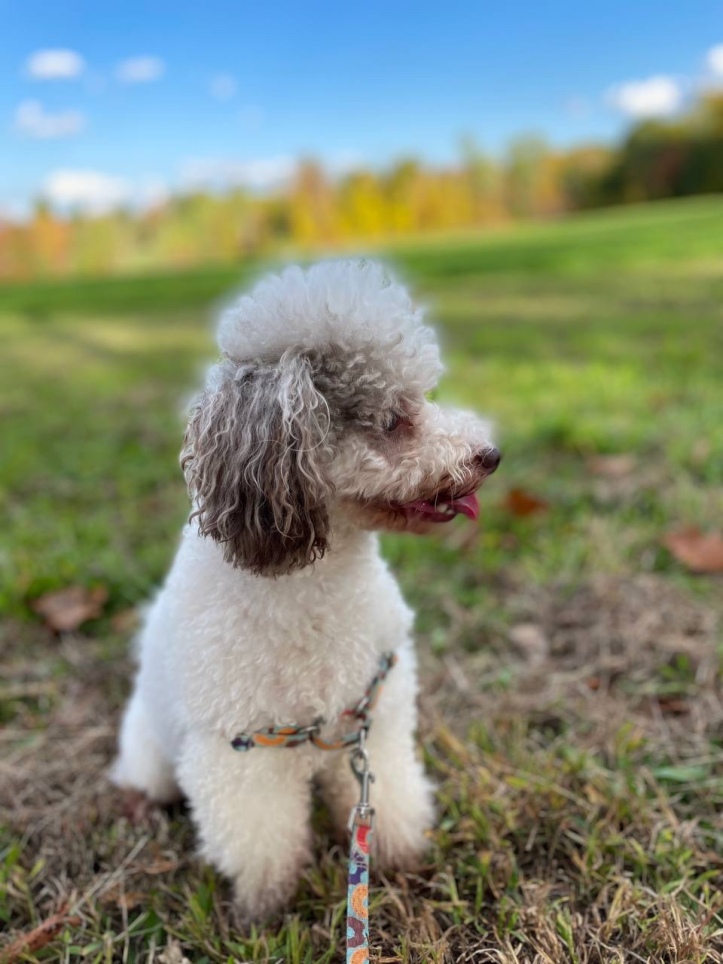 I searched high and low for him and here he is! He will be the dad to F1 Mini Bernedoodles and Micro Bernedoodles. Jacob produces a beautiful array of colors in his Micros. Blue Merle Tri’s and Black/White Tuxedo are his specialty with F1 Mini’s. I mean.. how cute does it get? 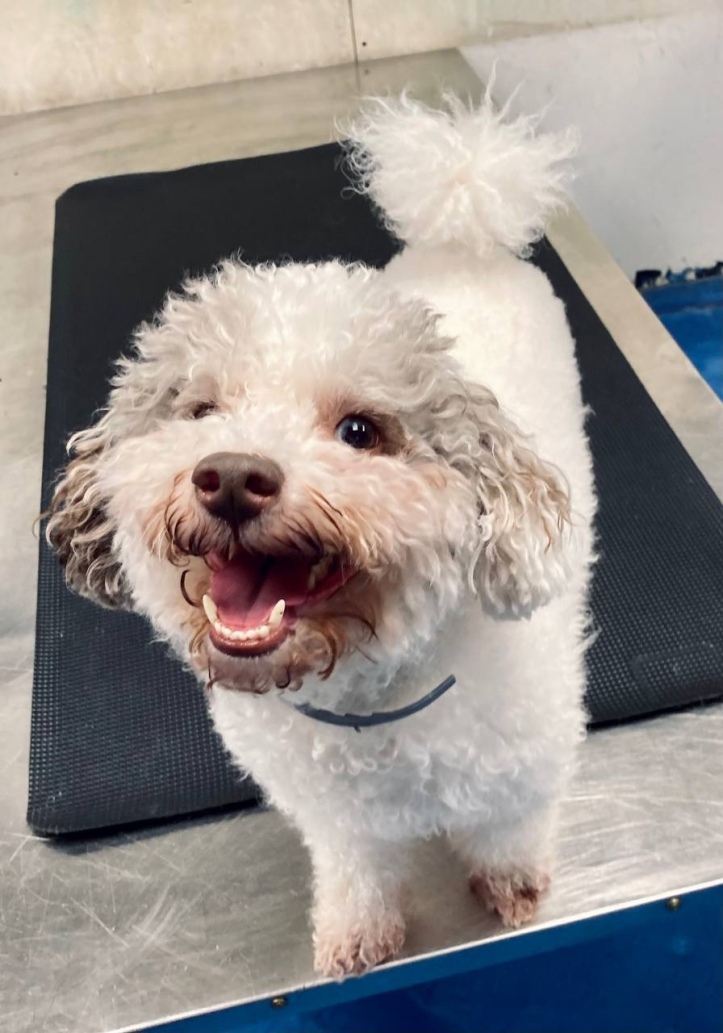 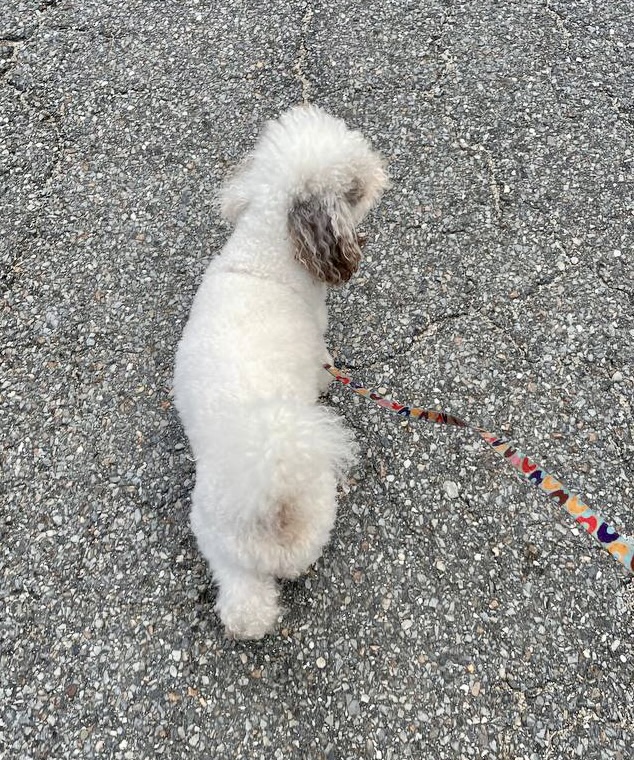 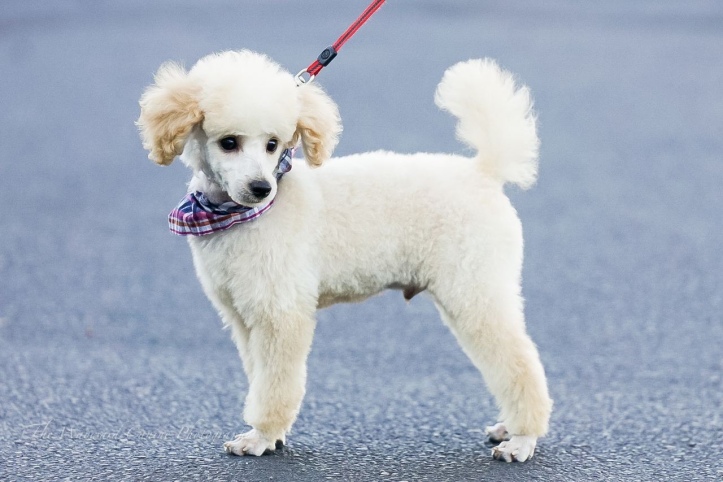 This is Prince Caspian at 16 weeks old and already learning the basics of Discovery training!

Updated Video for Prince Caspian and his Discovery Training!

This handsome little fellow is a 12 lb Toy Poodle and will be the dad for some future Mini Goldendoodles! Prince Caspian is so smart that he is currently being trained as a Discovery Dog! My vision is to start a non-profit segment of Massachusetts Bernedoodles with some of Prince Caspian’s offspring! Service dogs in the discovery area so our airports can be safe and service dogs for disabled folks as well as our veterans. His babies will be highly trainable for various services which is super exciting!

Trey is a Traditional Tri-Colored 45lb AKC registered (small) standard poodle and, as you can see, he’s stunning! He is almost old enough to become a dad now and will become a sire in 2022-2023! He has passed all of his health testing with flying colors and is a very sweet boy. Trey will be one of the dads to our F1 and F1b bernedoodles! 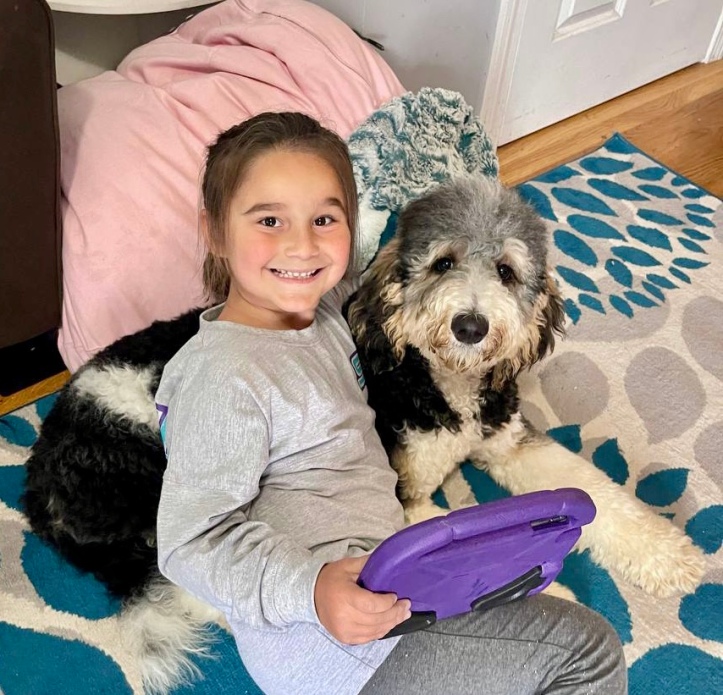 Trey guy is the sweetest, most mellow poodle I have ever met. He’s wonderful with children and other dogs. He’s an amazing addition to the pack and we are fortunate to have him. He will produce beautiful and very well tempered Tri-Colored F1 and F1b Bernedoodle Puppies! 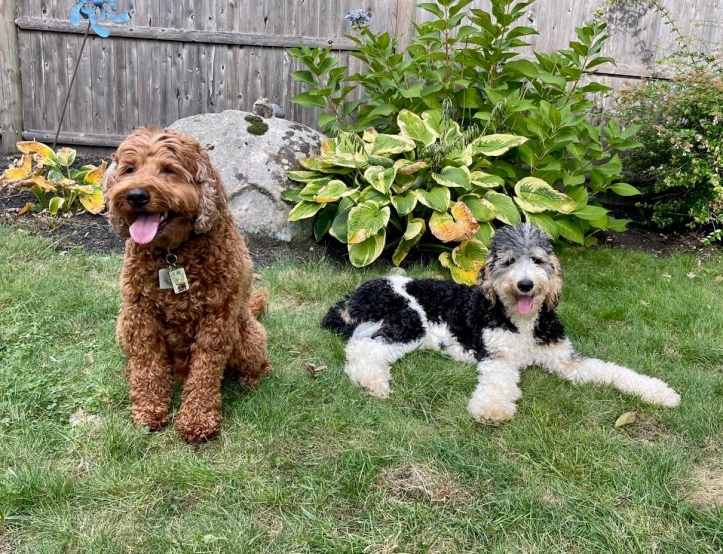 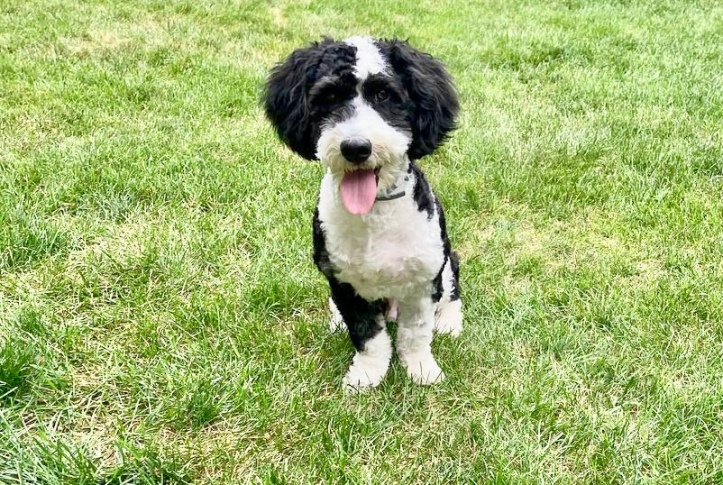 Johnny Cash is an Oh So Adorable and lovable little guy who loves nothing more than to be with his humans, playing fetch or just lounging around. He is a very fast learner because he loves impressing his human guardian family!

Johnny Cash adores his tiny human siblings who are just 1 and 2 years old! Whether he is following them around the house, laying next to their beds as they sleep or cleaning up the floors after meal time, he’s happy to be with his guardian family! He has a natural instinct to know when he should be gentle and when it’s playtime. He is so loyal that he won’t leave his human siblings when they are sick, not even for a minute! He has to be near them and he will whine and cry if he senses the kids need something or if they need mamma. He will also alert his family of strangers near the house! His temperament and personality are perfect for a family with children. He loves playing with other dogs and enjoys when people come over to visit...more hands for belly rubs and throwing balls!

Johnny is the son of Penny and and Jacob. Therefore, his genetics are “clear by parentage” since both parents are cleared. See Jacob’s results on the “meet the dads” page and Penny’s genetics via this link! archive.zip 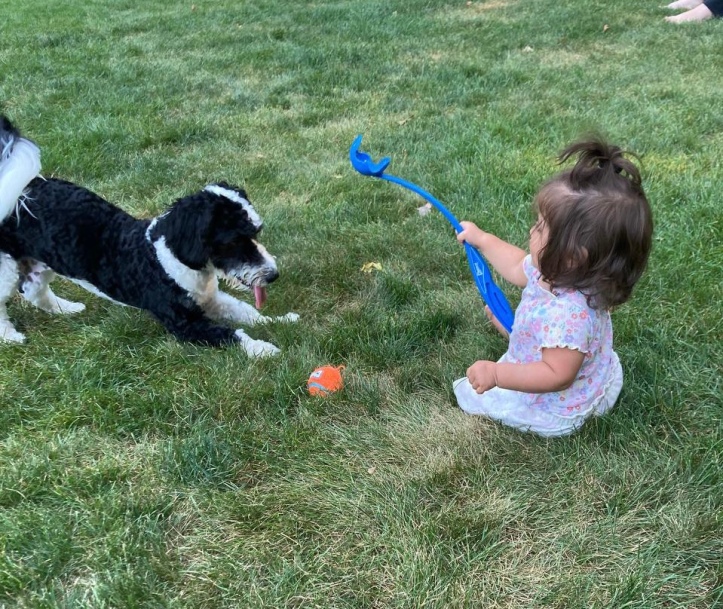 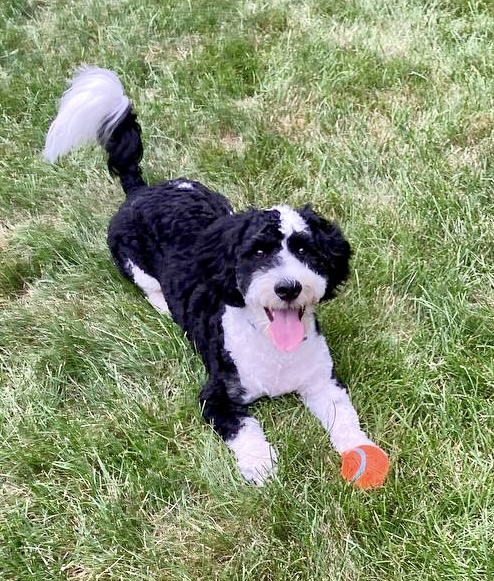 Zeppelin is a Mini F1 Bernedoodle and his color is Blue Merle with white markings. He weighs 35lbs and he is a heart throb! He will stop anyone in their tracks with his looks alone! He is a cuddle bug with the most tender heart. With a distinctive, high stepping saunter, he all but skips through life! He loves his canine sister, his toys and the outdoors but really… the more toys the better! In the mornings, he loves laying on the cool grass while he enjoys the morning dew.

Zeppelin is the son of Penny and Jacob! Therefore, genetically he is clear by parentage. You can view Jacob’s genetics on the “meet the dads” page and for Penny’s, click on this link! archive-1.zip (click link to view)

Hendrix is a Toy Poodle and weighs 6 lbs! His colors and patterns are called “Phantom” meaning he’s black with brown markings on his face, legs, chest, ears and eyebrows! He has the funniest little personality and a childish way about him. You’d never know he’s a year old already!

Sign up for our newsletter to receive puppy updates